Difference between revisions of "Latency Measurements"

This page provides detailed information on the definition of latency measurements in Motive and the NatNet SDK streaming protocol.

The OptiTrack systems combine state of art technologies to provide swift processing of captured frame data in order to accomplish 3D tracking in real-time. However, minimal processing latencies are inevitably introduced throughout processing pipelines. For timing-sensitive applications, these latency metrics can be monitored from the Status Panel of Motive or in the NatNet streaming protocol.

We have greatly improved the latency measurements in Motive 2.0. Now, latency metrics report the time passed since specific points within the processing pipeline. More information is covered in this page. 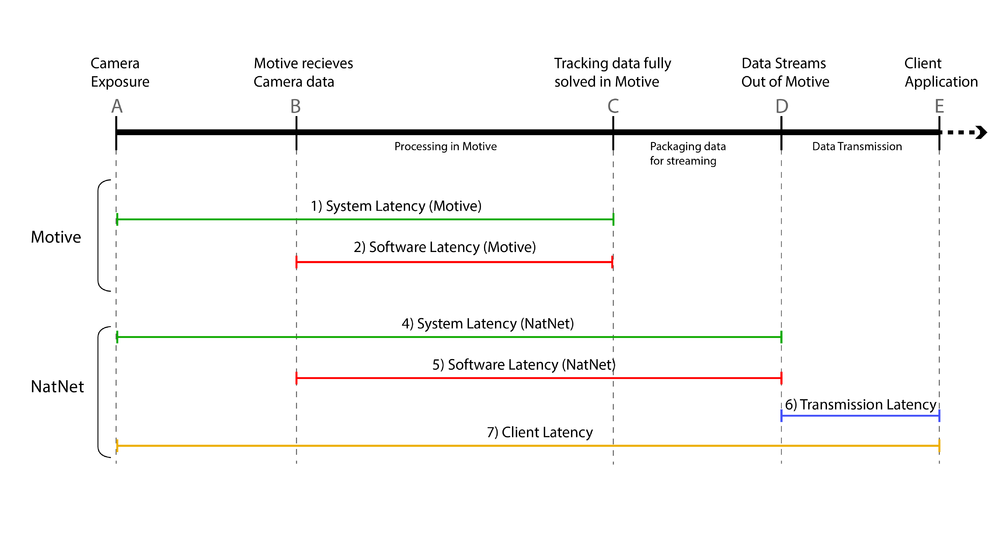 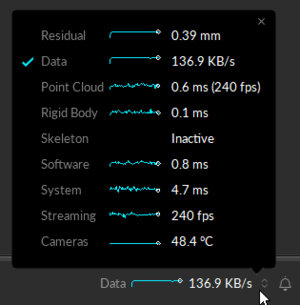 In NatNet 3.0, new data types have been introduced to allow users to monitor measured timestamps from specific points in the pipeline. From sFrameOfMocapData received in the NatNet client applications, the following timestamps can be obtained:

These timestamps are reported in “ticks” that are provided by the host computer clock. When computing latencies, you need to divide the timestamp values by the clock frequency in order to obtain the time values in seconds. The clock frequency is included in the server description packet: sServerDescriptionPacket::HighResClockFrequency. To calculate the time that has elapsed since a specific timestamp, you can simply call the NatNetClient::SecondsSinceHostTimestamp method, passing the desired timestamp as its input. Using clock synchronization between the client and server, this will return the time in seconds since the corresponding timestamp.

In previous versions of Motive (prior to 2.0), the only reported latency metric was the software latency. This was an estimation of the software latency derived from the sum of the processing times taken from each of the individual solvers in Motive. The latency calculation in Motive 2.0 is a more accurate representation and will be slightly larger by comparison than the latency reported in the older versions.