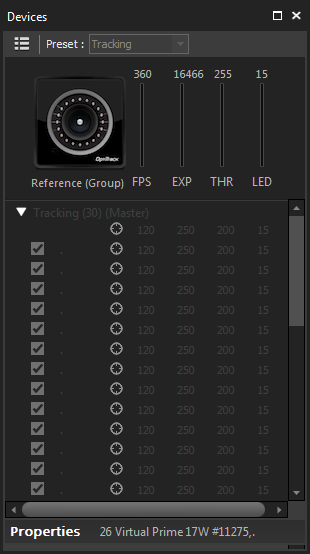 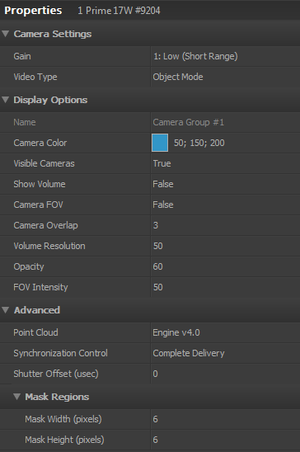 Camera Color: Sets the color for camera group members as they appear in the 3D viewport. Color values are input as standard RGB triplets.

Marker Color: Sets the color that markers will be displayed as when they are detected by this camera group. Color values are input as standard RGB triplets.

Visible Cameras: Selects whether cameras in the group are displayed in the viewport.

Numeric LEDs: Selects whether the numeric LED on the front of the camera is on or off.

Show Markers: Selects whether camera group 3D point cloud markers are displayed in the viewport. Disabling this setting will cause the markers to not appear within the 3D Viewport, even though they are being tracked, and can slightly reduce overhead on the computer if you are limited by physical performance. Valid options are True (markers are visible) (default), False (markers are hidden).

Show Volume: Selects whether the capture volume (defined as capable of tracking a single marker) is displayed in the viewport. Enabling this will allow the volume to be displayed as a wire cage around the ground plane where multiple cameras fields of view intersect. Valid options are True, False (default).

Camera FOV: Selects whether camera FOVs are displayed in the viewport. Camera FOV accurately depicts the frustum angles, while depth is artificially capped. Actual depth may vary depending on camera settings and marker size. Enabling this feature can be beneficial in volume visualization for creation and adjustment. Valid options are True (default), False.

Camera Overlap: Sets the minimum camera overlap necessary for a region to be visualized as part of the capture volume. Higher numbers represent more camera coverage, but they will tend to reduce the size of the visualized capture volume. Valid range is 1 to 25 (default 3).

Volume Resolution: Sets the resolution of the capture volume visualization. A higher number represents a more detailed visualization. Valid range is 1 to 120 (default 50).

Opacity: Sets the opacity of the volume visualization. A value of 1 is transparent and 100 is opaque. Valid range is 1 to 100 (default 100).

FOV Intensity: Sets the opacity of the FOV visualization. A higher value represents a more opaque volume visualization. Valid range is 1 to 100 (default 50).

Illumination Type: Sets the illumination to either Strobed or Continuous. Strobed illumination will output more light with equivalent power when compared to Continuous and is the ideal choice for standard motion capture volumes. Continuous is ideal for volumes where external IR interference is potentially an issue (e.g. with IR actuated stereovision systems that cannot synchronize to the OptiTrack cameras, or when other volumes may be within line of sight).

Fan Mode: Provides an option to turn off the camera fan during recording, for S250e cameras only.

Synchronization: Selects which synchronizer will be used. Synchronizer v2 is the default option, and should be used for optimal performance unless otherwise instructed by the OptiTrack support team.

Synchronization Control: Determines how late camera frames are dealt with. Timely Delivery will drop late frames, which is ideal for real-time applications where data completeness is secondary to timeliness. Complete Delivery will hold up processing of frames when a frame is late. Automatic, which is the default and recommended setting, runs in Timely Delivery mode until it gets a non-trivial percentage of late frames, at which point it will automatically switch to Complete Delivery.

Blocking Width (pixels): Sets the extra pixel coverage (width) for masking visible markers when the block visible function is used. A larger number will block a wider grouping of pixels simultaneously. Valid range is determined by the resolution of the cameras.

Blocking Height (pixels): Sets the extra pixel coverage (height) for masking visible markers when the block visible function is used. A larger number will block a wider grouping of pixels simultaneously. Valid range is determined by the resolution of the cameras.