Like many other measurement systems, calibration is essential for optical motion capture systems as well. During camera calibration, the system computes position and orientation of each camera in the 3D space as well as the amount of distortion in the image. Using the information, Motive constructs a capture volume. Specifically, this is done by observing 2D images from multiple synchronized cameras and associating the position of known calibration markers from each camera through triangulation. Note that if there is a change in the camera setup over the course of capture, the whole system will need to be recalibrated in order to accommodate for the change. Moreover, even if the system setup is not altered, the accuracy of a system will naturally deteriorate over time due to ambient factors, such as fluctuation in temperature and other environmental conditions. Thus for accurate results, the system needs to be calibrated periodically for accuracy of the captured data.

System settings used for calibration need should be kept unchanged for capture as well. If camera settings are altered after the calibration, the system would potentially need to be recalibrated as a result. To avoid such inconveniences, it is important to optimize both hardware and software setup before the calibration. First, cameras need to be appropriately placed and configured to fully cover the capture volume. Each camera must be mounted securely so that they do not move during capture. Motive's camera settings used for calibration should ideally remain unchanged throughout the capture. Specifically, a recalibration will be required if there is any significant modifications to the settings that influences the data acquisition, such as camera settings, gain settings, and Filter Switcher settings. If these settings are modified, it is recommended the system be recalibrated. Therefore confirming software settings and hardware setup is preferred before calibration. ↑

All extraneous reflections or unnecessary markers are ideally removed from the capture volume before calibration. In fact, the system will refuse to calibrate if there are too many reflections other than the calibration wand present in the camera views. However, in certain situations, unwanted reflections or ambient interferences could not be removed from the setup. In this case, these irrelevant reflections can be filtered out via using the Masking Tool. The masking feature in Motive ignores pixels from selected, or masked, regions in the 2D camera view. This is very useful when blocking unwanted reflections that could not be removed from the setup. The Mask Visible feature automatically detects all of the existing reflections present in the 2D view and masks over them. Furthermore, masks can also be created manually by selecting pixels, rectangular regions, or circular regions in the image via the Draw Mask features. Use the masking tool to remove any extraneous reflections before proceeding to wanding.

However, you should be careful when using the masking features because it totally ignores all the pixels from selected regions from the 2D image of the camera. In other words, the data in masked regions will not be acquired by the system for computing the 3D data, and excessive use of it may result in data loss or frequent marker occlusions. Therefore, all extraneous illuminations must be removed or covered before the using the masking tool. After all reflections are removed or masked from the view, proceed onto the wanding process. ↑

The wanding process is the core pipeline that samples calibration data into Motive. A calibration wand is waved in front of the cameras repeatedly, allowing all cameras to see the markers. Through this process, each camera captures sample frames of the markers in order to compute their respective position and orientation in the 3D space. There are a number of calibration wands suited for different capture applications. Set an appropriate wand type under the OptiWand entry in the Calibration Options.

After confirming the setup, press Start Wanding in the Calibration pane to initiate the wanding process. Bring your calibration wand into the capture volume and start waving the wand slowly across the entire capture volume. Draw figure eight with the wand to collect samples at varying orientations, and cover as much spaces as possible for sufficient sampling. If you wish to start calibrating inside the volume, cover one of the markers and expose it wherever you wish to start. When at least two cameras detect all the three markers while no other reflections are present in the volume, the wand will be recognized and Motive will start collecting samples. Wanding trails will be shown in colors on the 2D view. A table displaying the status of the wanding process will show up in the Calibration pane to monitor the progress. For best results, wand the volume evenly and comprehensively throughout the volume, covering both low and high elevations. 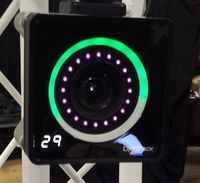 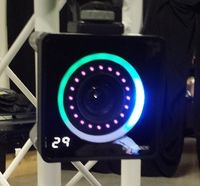 After the calculation has completed, you will see cameras displayed in the 3D view pane of Motive. However, the constructed capture volume in Motive will not be aligned with the coordinate plane yet. This is because the ground plane is not set. Proceed to setting the ground plane if the calibration results are acceptable. ↑ 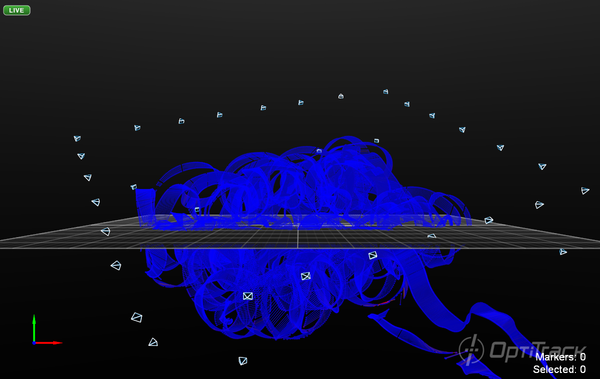 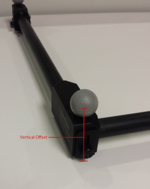 The Vertical Offset setting in the Calibration pane is used to compensate for the distance between the center of markers on the calibration square and the actual ground. Defining this value takes account of the offset distance and sets the global origin slightly below the markers.

Ground Plane Refinement feature is used to improve the leveling of the coordinate plane. To refine the ground plane, place several markers with a known radius on the ground, and adjust the vertical offset value to the corresponding radius. You can then select these markers in Motive and press Refine Ground Plane, and it will refine the leveling of the plane using the position data from each marker. This feature is especially useful when establishing a ground plane for a large volume, because the surface may not be perfectly uniform throughout the plane.↑

Calibration files can be used to preserve calibration results. The information from the calibration is exported or imported via the CAL file format. Calibration files reduce the effort of calibrating the system every time you open Motive. The Calibration File can also be stored within the project so that it can be loaded whenever a project is accessed. By default, Motive loads the last calibration file that was created, this can be changed via the Application Settings.

The OptiTrack motion capture system is designed to track retro-reflective markers. However, if you wish to use Active LED markers for capture, the system will ideally need to be calibrated using an Active LED wand. Please contact us for more details regarding Active LED tracking. ↑