An Ethernet-based camera system networks via Ethernet cables. Ethernet cables not only offer faster data transfer rates, but they also provide power over Ethernet to each camera while transferring the data to the host PC. This reduces amount of required cables and simplifies the overall setup. Furthermore, Ethernet cables have much longer length capability (up to 100m), allowing the systems to cover large volumes. Ethernet cameras include Prime series cameras and Slim 13E cameras.

Main components included in the Ethernet based system: 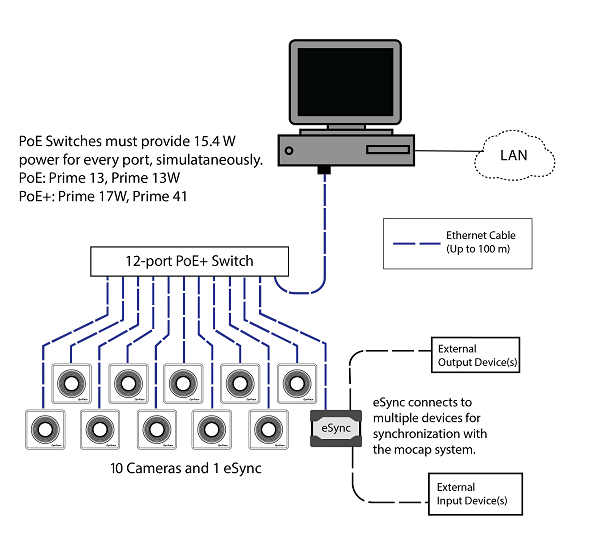 Ethernet system with one Ethernet Switch

Ethernet system with more than one Ethernet PoE switches

A USB camera system provides high quality motion capture for small to medium size volumes at a relatively (compared to Ethernet cameras) affordable price range. USB camera models include the Flex series (Flex 3 and Flex 13) and Slim 3U. USB cameras are powered by the OptiHub, which is designed to maximize the capacity of Flex series cameras by providing sufficient power to each camera, allowing tracking at long ranges. A USB system is not suitable for a large volume setup because the USB 2.0 cables used to wire the cameras have a 5 meter length limitation. If needed, up to two active USB extensions can be used when connecting the OptiHub to the host PC. However, the extensions should not be used between the OptiHub and the cameras. When incorporating multiple OptiHubs in the system, use RCA synchronization cables to interconnect each hub.

Tracking Bars — V120:Duo and V120:Trio — are also USB camera models, but they feature an integrated hub and cameras. Therefore, their USB output is directly connected to the host PC without routing through the OptiHub. 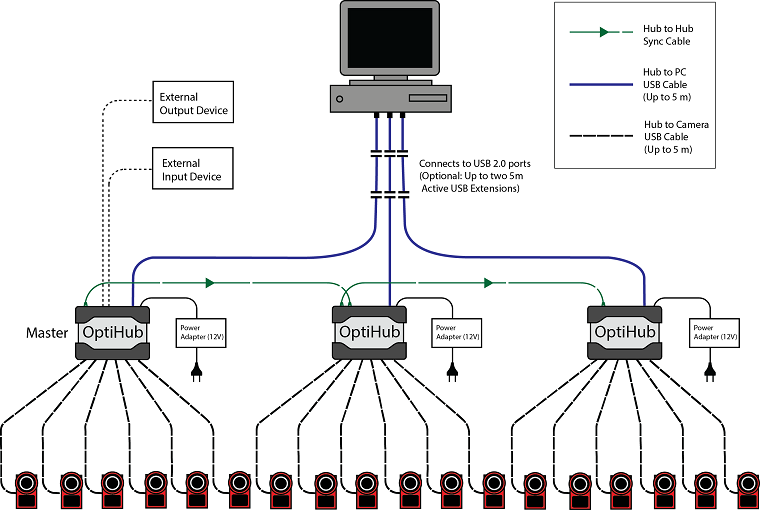